Dublin-based singer, multi-instrumentalist and songwriter, Eithne Ní Chatháin’s 3rd studio album, Iníon, is a contemporary sean-nós record that explores the beauty, tradition and pathos of traditional song in a contemporary, vital and unique reimagining.  She is a singer both reaching back into a deeply held tradition, while simultaneously pressing out against its very edges.  Inni-K sets out to create a re-hearing of something dear, something essential, and in doing so, she has – with fellow collaborators: Brendan Jenkinson (clarinets), Brian Walsh (drums & percussion) and Mary Barnecutt (cello) – created a bold, new and contemporary experience of sean-nós song.

Inni-K appear at Girvan Festival thanks to generous support from Culture Ireland.

Allan is one of Scotland’s leading pipers. One of the renowned family of West Highland tradition bearers the MacDonalds of Glenuig. He is a master of the big pipes, border pipes and Scottish small pipes and is also renowned as a composer, musical director and workshop leader. As a singer he is an acknowledged authority on the relationship between piping & Gaelic song. His work reuniting seventeenth-century piping with its Gaelic roots is influencing a whole generation of pipers.

As weel a kent face in the Westcliffe as Sandy Bells by this stage, we are delighted to welcome back Fermanagh-born traditional music legend Cathal to the Festival to play a concert set with old friend and companion Allan MacDonald. Cathal is an All-Ireland Champion on both flute and whistle, a recipient of TG4 Gradam Ceoil’s Traditional Singer of the Year award in 2010 and a living storehouse of Ulster song & lore. Regular Festival attendees may also recall Cathal from his moderately acclaimed, occasional side-project The Boys of the Lough!!

Alasdair Roberts is a gifted interpreter of traditional songs and ballads from Scotland and beyond described by fRoots magazine as ‘quietly escalating towards Scottish national treasure status’. Alasdair is also a songwriter, prolific recording artist and prodigious collaborator having worked with a range of artist including poet Robin Robertson, Gaelic singer Mairi Morrison, film-maker Luke Fowler and many others. Festival audiences may also know Alastair as one quart of folk doyens The Furrow Collective.

We’re delighted to have Alasdair coming to Girvan to give us a concert set and also contribute to our Josie Neill Songs project.

In a ★★★★★ review, the Guardian described their second record Says the Never Beyond as “a brilliant set of wintersongs from all across Britain that almost hovers in the air like an eerie snowglobe of sound” and placed it in their list of The 10 best folk albums of 2020.

As well as giving us a concert set on Saturday night, we’re delighted that Debbie from Burd Ellen is contributing to our Josie Neill Songs project.

Described as one of Scotland’s most overlooked poets, Ayrshire born Josie Neill published her first full collection There’s Ma Mammy Wavin in 2021 at the age of 86. The collection, launched at the Wigtown Book Festival to wide acclaim, showcases Josie’s writing in rich Scots that evokes her childhood in Muirkirk, a “wee, isolated village among the hills”.

Girvan Festival has invited 4 of Scotland’s most inventive traditional Scots singers to each set a poem of Josie’s to music for the first time. The songs will be showcased at the Festival alongside poetry readings from Josie and her collaborator Stuart A Paterson.

The Josie Neill Songs project has been made possible thanks to generous support from Tasgadh – Traditional Arts Small Grants with devolved funding from Creative Scotland and the Scottish Book Trust.

Renowned as the traditional music tutor, Nigel is also a performer, collector, publisher and acknowledged authority on Scottish traditional music who freely shares his knowledge and expertise in an open and infectious way! In 2017 Nigel was inducted into the Scottish Traditional Music Hall of Fame.

Based in SW Scotland, Gavin (fiddle) & Ruth (nyckelharpa) are well-known from a huge number of bands, groups and projects. Most recently they’ve been seen in Journeyman – a 10-piece band focussing on Gavin’s original tunes and The Firelight Trio. Gavin is a prolific and enthusiastic composer of tunes. Many of his tunes have entered the tradition and repertoires of fellow musicians including Marie Fielding, Old Blind Dogs, Dochas, Liz Docherty and Give Way and he has recently published 200 of his tunes in his ‘Horizons’ collection.

Gavin & Ruth will give us a concert set on Sunday evening and will lead a session drawing on tunes from Scandinavia and further afield.

Stuart is an Ayrshire-born poet and performer. His numerous poetry collections include Saving Graces, Border Lines, Mulaney of Larne and other poems, Aye, Looking South, and heelster-gowdie / beul-fo-bhonn with Marcas Mac an Tuairneir.

Stuart received an Eric Gregory Award from the Society of Authors in 1992 and a Robert Louis Stevenson Fellowship from the Scottish Book Trust in 2014. He was writer-in-residence for Dumfries & Galloway 1996-98, and was appointed the Scots Language Centre’s Virtual Poet in Residence 2015-2016. In 2017, he was appointed BBC Scotland Poet in Residence.

Stuart has also been instrumental in publishing the poetry of Josie Neill and will host our Josie Neill Songs project event. We might see if we can convince him to read a few of his own poems as well!

Emma Tomlinson is a Glasgow based freelance Musician, Composer, Tutor and Researcher who runs the Ayrshire Traditional Music Summer School. Originally from Liverpool, Emma moved to Scotland to pursue a career in Traditional music. Emma plays Fiddle, Viola and Piano and is an award winning instrumental teacher winning the MG Alba Music Tutor of the Year in 2017.

Emma will be leading our Fiddle Workshop and playing a concert set on Saturday evening where she will be joined by her husband, Adam Sutherland himself a fiddler of no little renown having played with a huge number of pre-eminent bands including Peatbog Faeries, Croft no Five, Treacherous Orchestra and Session A9 with whom he last visited the Festival in 2007!

Storyteller & musician Heather Yule grew up steeped in folktales and music as she accompanied her mother, folklorist Dr Barbara McDermitt, on collecting expeditions to the master storytellers of the Scottish Traveller and Gaelic traditions. Heather is a board member of Traditional Arts advocacy group TRACS.

Over the Festival weekend Heather will be telling stories to bairns big & little!

Evie Waddell is a singer in both Scots & Gaelic and a clarsach player & fiddler from Stirlingshire, currently completing her final year of a BMus degree in Traditional Music at the Royal Conservatoire of Scotland.

Evie is contributing a song to our Josie Neill Songs project and we hope we can convince her to give us a few more over the course of the weekend.

Three-piece Irish trad band whose committed sessioneering at the 2019 Festival earned them an invitation to play a concert set at the next festival – we didn’t know then that it would be 3 years before we could welcome them back! 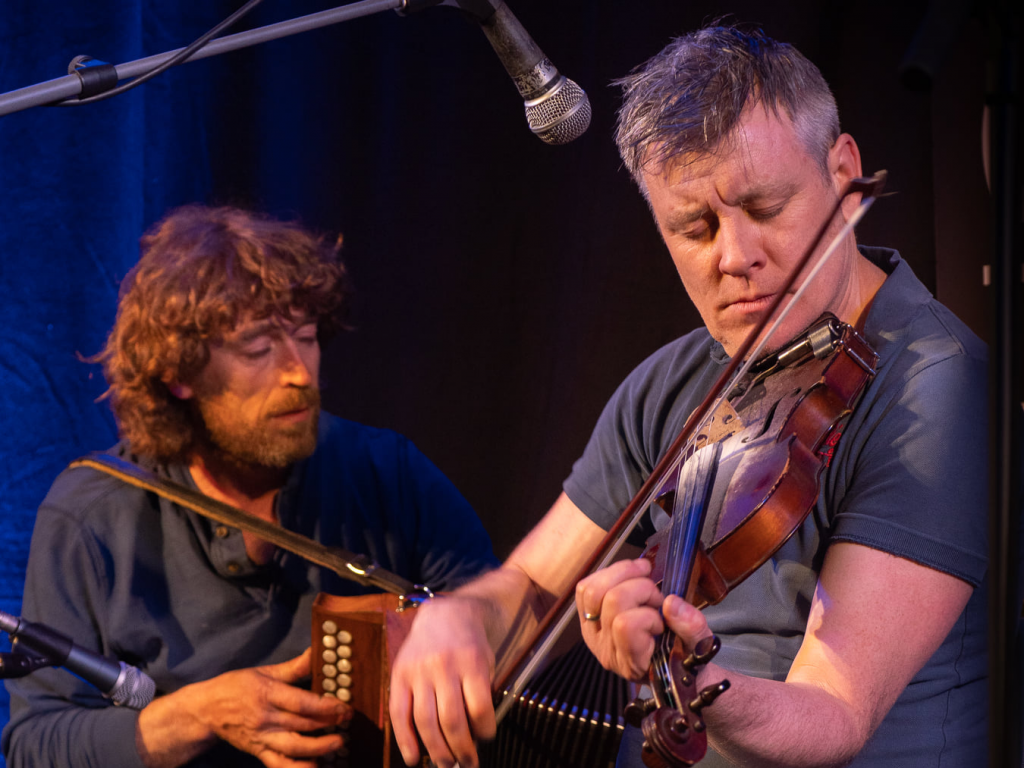 The Sound of Dance project was set up by Glasgow-based step dancer Kae Sakurai in 2015 to explore the relationship between percussive dancers and musicians. Kae runs the Kelvingrove Dancers a well-established step dance class in Glasgow. She has a wide interest in many aspects of Scottish Dance including Country Dancing, Highland Dance and Scottish and Cape Breton-style Scottish Step Dancing.

Michael is a gifted accordeonist and visual artist. A member of Glasgow’s St James the Great Comhaltas branch, Michael is an All Ireland champion winning the piano accordeon competition in the 15–18 category at Drogheda in 2019.

Michael will take our Accordion Workshop and will also give us a concert set on Sunday afternoon.

The House Band, made up of committee members and friends of the Festival, will contribute to proceedings over the Festival weekend. Led by the redoubtable Maggie Macrae (who is also contributing to our Josie Neill Songs project) the band also features Rosie Lindsay (piano), Michael Muir (fiddle & guitar), Rachel Muir (fiddle) and Neil McDermott (guitar & fiddle). Other faces you might see over the Festival weekend (if you/we are lucky) include Susie Kelly, Ali Macrae & Carol Anderson.